Today I sampled the buckets for D-hinge development. Overall numbers were low, considering that we put 300,000 eggs in each bucket. The best group was treatment group 2: no KCl exposure, but fertilized. Details in post:

Started by checking a few buckets by screening on 20um, and sampling out 1ml from the suspended larvae in ~200ml. Used lugols to stop the larvae from moving around.

Numbers were very low, but I continued looking anyway and sampled all buckets.

I screened all buckets on 20um screen, then suspended the eggs using a suirt bottle filled with filtered seawater into a tripour. Then I added enough FSW to reach certain total volumes (detailed in results), then sampled out 1ml after mixing the larvae around. Used a few drops of lugols to stop movement, then counted the number of D-hinge larvae in that 1ml. 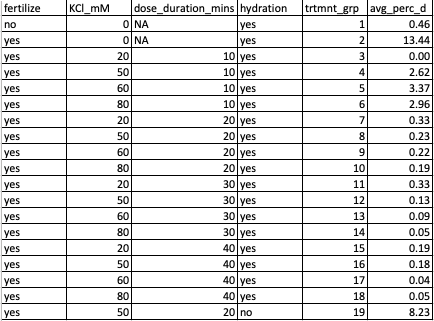 The result summary table is showing the treatment groups (KCl dose in mM, duration of dosing, and whether or not the group was hydrated and/or fertilized), and the average percent of development to D-hinge (averaged between the two replicates).

Note: 19 did not have a replicate.

Regarding the low D-hinge counts relative to stocking amount:

Regarding D-hinge in negative control (1):