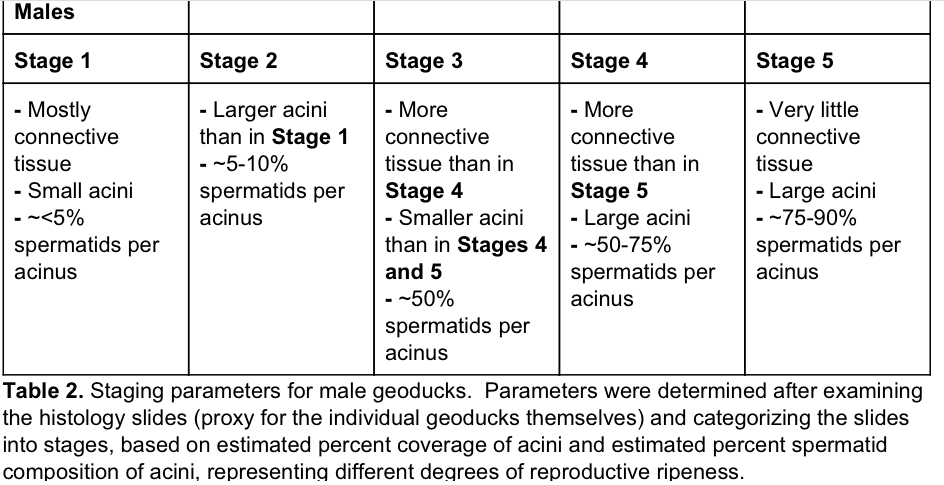 Images of the slides from Shelly can be found:

Note: I have not looked at what Kaitlyn stage assignments were (her notebook post and results are linked in the GitHub Issue #1008).

Screenshot of spreadsheet and description of columns:

Some difficulties discerning the different stages as several were very close and could go a couple ways, but after comparing the photos to each other and to the photos on the figshare from my capstone, I think the final stage assignments are pretty good. Again, due to the similarities between several slide images, there may be some wiggle room where some images could fall well enough under two different stages.

Males were staged on the scale as shown in the image at the beginning of this post of the table for males. 5 stages total.

Relative comparisons. Wasn’t able to measure the microns across for the eggs because the scale bar was missing from several images, so I wasn’t sure if they were zoomed in more or cropped… etc. Therefore, I decided to base the stages off of the relative coverage of connective tissue vs. gonad tissue - with more gonad tissue/follicle coverage = more ripe; and general follicle size, which larger follicles being more towards ripe.

Additionally, by visually comparing the images provided by Shelly with the images in the figshare from my capstone for the females, it seems pretty clear that none of the females from Shelly’s images fall under stages 1-4 based on general oocyte size.